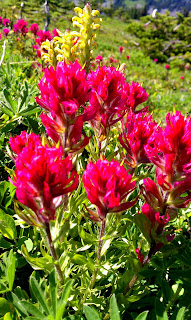 Reading Born to Run is the spiritual journey I never expected to encounter. It has come to me nonetheless and the result is both surprising and life-giving. I’ve never been this happy before and I wouldn’t have expected that running would play such a big part in that happiness.

Some more thoughts on barefoot running.

Even the first time running on my toes was amazing and transformative. The first thing I noticed was that it seemed to require more effort and concentration than I’d been used to. To do it I needed to use muscles that I hadn’t much used before. I also needed to pay more attention to the ground, its slopes and its variable surfaces. I was running the Queen Anne loop in a new pair of Brooks Green Silence shoes, the first such shoes I’d run in devoid of support. My girl-friend at the time had already begun experimenting with Five-Fingers shoes and encouraged me to give the whole toe-running thing a try. I wasn’t expecting transformation, I wasn’t expecting anything. So I was surprised when after my first run that I felt so much better than I ever had running. I hadn’t gone far but even over that short distance of 2 miles and soon 4 and 5 miles I noticed one thing instantly. Less pain. And with that I quickly noticed another thing: more fun. More difficult perhaps but also a lot more fun.

Over my first year of barefoot running I had read no books on the subject. And I’d received no coaching. I’d watched no videos. None of my running companions were all that graceful or light of foot. But with my first pair of Five-fingers I hit a stride of speed and ease during one subsequent run I’d never experienced before. And in the six months since I’ve increasingly chased after this once elusive goal: To run lightly and with joy and fun and ease - to experience flight. 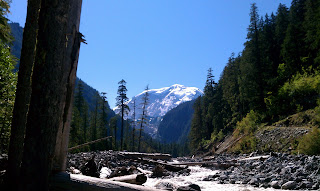 Yesterday I did 16 miles on the Wonderland and Spray Park Trails in Mount Rainier National Park. For the first time I ran a hiking/single track almost exclusively in Barefoot Ted’s Luna sandals. I even put in a mile completely barefoot before snow forced me to consider putting on my Merrell trail gloves. But all three modes were in barefoot style and all demanded a light and lithe style of running. This first time flying down single track with barely a sandal on proved to be a new high point on the ‘fun-factor’ scale. I also noticed on this run how my sense of time melted away in the bliss of running nearly unshod.

Running barefoot is as close to Zen as I suppose I have ever come. Every step considered, every rock felt, every breeze was noticed. And yet time continued to matter less and less. My only sense of its passage was the alarming pace with which I was consuming my potable water. When I ran out of water I sought the help of two strangers and their water filter and got eaten alive by mosquitoes. Time then came crashing back into my reality as fresh bites and a swarm of late-afternoon hikers invaded all the empty spaces and traveling the single track suddenly became more cumbersome.

Still it was pleasant to run into Craig when I stopped to rest on the final 1.8 miles. A 41-year-old father of several children Craig had also run his first 50 mile race a few weeks ago at the White River 50. For several minutes we reminisced about how friendly, fun, and positive the experience had been and together we tossed around the idea of whether either of us would attempt a 100 mile race. Craig had apparently qualified for the Western States 100 with his 10 hour time in the White River 50. While I had not run nearly as fast, I like Craig was surprised to find myself even contemplating a 100 miles within minutes of finishing my first 50. And yet here both of us were contemplating it yet again. 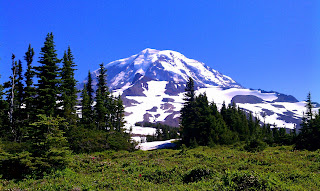 I left Craig soon thereafter and quickly began to experience the lethargy and hunger that came from 6 hours of running on almost no food and not nearly enough water. After 16 miles and 6 or 7 hours I ditched Mowich Lake and Mount Rainier and hightailed it to my favorite friends and a BBQ where I'd spend the next three hours overdosing on meat.