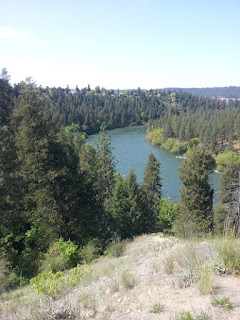 I spent the weekend in Spokane, WA and took the time to explore 21 miles of waterfalls, riverfront trails, and hot desert sun. Whatever else Spokane doesn't have going for it, it DOES have ample opportunities for outdoor recreation. Additionally for tourists it has many beautiful places to hangout at, sight see, and picknick. Having formerly lived there I can also vouch for its abundant back-country and in-resort skiing opportunities as well as several in-city rock-climbing routs. I heard the figure thrown out that Spokane boasts some 500+ established and documented climbing problems on its abundant basalt and granite formations that rim the city. Spokane even has, as I discovered on my run, a nice well-established hippy/hipster enclave in it's Peaceful Valley district. Now, back in my days when I was a self described evangelical going to Whitworth University I had only heard of Peaceful Valley as the 'ghetto' and a place you would 'avoid at all costs after dark.' However in the bright light of Spokane's desert sun, I found its houses charming, its streets safe and free of any evidence of crime, and its citizens friendly. Peaceful Valley's many overgrown rhubarb plants had me fearing at worst that I might be offered some rhubarb crumble or some rhubarb pie a la mode. Peaceful Valley is where I started my run and its many garden patches, chicken coops, and rooster calls has me suspecting that its holistic attitude toward sustainable living is what may really be the dark threatening perversion that the rest of Spokane's urban sprawl, split-level loving, evangelical Christians fear. 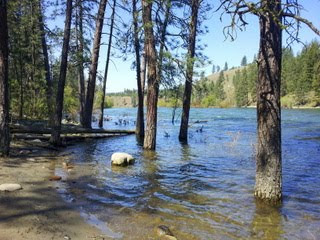 I can't say my entire run was without fear or danger however. The Spokane River was full and raging and at places the trail was underwater. I can also say that I encountered a dead end trail that would have had me crossing the treatment sewage plant's discharge waters and that and mile or two after that I nearly leapt for cover when I ran near a shooting range on Spokane's outskirts. I can only say that from my perch above it on the bluffs of the Spokane River it looked rather like a al-Qaeda compound...but then I figured that since guns probably out number American's I figured Spokane probably needed an outlet or two to discharge its weapons safely. Still I swear someone at that range was playing with a real cannon and needless to say I did not linger.

I finished my run near 7-mile bridge in Spokane and with temperatures reaching into the 80s I found I didn't have enough gas to complete the remaining 19 miles of "Trail 25" I'd spent the last several miles on. Having already run 19 miles I ran up Francis street and ended my run at a local Starbucks near 5-Mile Rd. 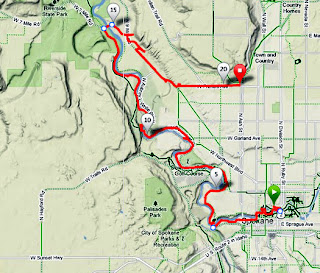