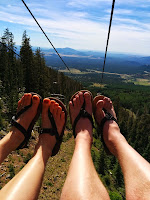 As is usual with weddings, there is sometimes the need for recovery oriented activities on the day after. Such was the case in Arizona this past weekend when after a very late bed-time of 12AM (midnight is late for a 35 y/o middle aged man such as myself), I set my alarm for 5.30, and settled into bed for a few hours of sleep. 5.30 came around, my alarm went off, my wife elbowed me in the face when I didn't hear it, and then I proceeded to groan for 20 minutes before throwing a leaky gallon water-jug in my too big REI day pack along with 3 cake-pops from the wedding and some trail mix from PCC. At this early point in my run, life felt like a run-on sentence.

Pictured above are Kristi and I's premium Luna Adventure Sandals, my footwear of choice for this adventure run. 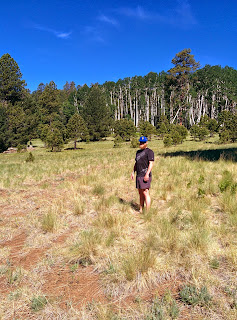 I wasn't optimistic about this run as starting out I didn't really have a proper way to carry enough water for the Arizona heat and elevation...and let's be honest...this was 5 hours after the end of a country club Arizona style wedding. (I don't even know what that means). Suffice to say my first couple miles in the Flag...well I might have looked drunk. And god that sun was bright at 6 in the AM! Soon after soaking my back and ass from previously mentioned leaky gallon jug I came across a gas station and ditched said leaky jug for a "real" water bottle. Now I was having more fun. Gone was the rather large and unwieldy jug...and so also were my water worries. 2 miles later I hit some single track called "The Arizona Trail" and suddenly everything was feeling right as rain. Early trail running took place near Shultz Pass road on the shady side of Mt Elden. The Arizona Trail portion of the climb was gradual enough that over the course of the first 10-12 miles I gained well over 2,000 feet and barely noticed the grade...much of the time the climb seemed rather flat which enabled me to run most of this completely up-hill portion of trail.

About half way through I branched off of the Arizona Trail in favor of a Kachina Wilderness trail that would eventually lead me to Arizona Snowbowl, my final destination. This final 6-8 miles in the Kachina Wilderness were the prettiest and toward the end the hardest miles of the run. Initially, 9000 feet of elevation brought vast green meadows and groves of stunning aspen to run through. 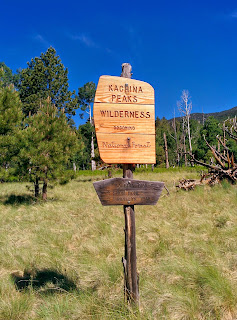 Later toward Snowbowl, Kachina served more more of her wild side with tricky roots, fallen granite boulders, an elusive wild-cat running through the shadows, and some nasty basalt from her volcanic days. It was in the final 2-3 miles that interspersed blinding white sun, black shade, and technical trail conspired to deprive me of my favorite pinky toe-nail. But it still looked good outside and so did I, so after some old ladies told me to bother only running when people were watching I hobbled myself to the base area proud of a nice climb and satisfied by some amazing Arizona scenery. I can't wait to get back and perhaps run the ATA Stagecoach 100 sometime in the next couple years.

Here's the route I took: 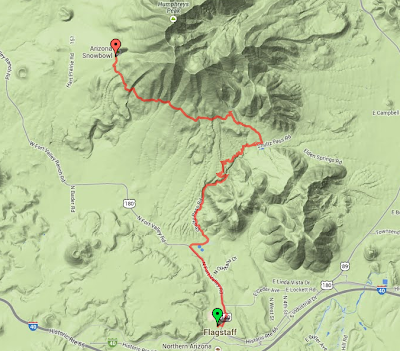