October 17, 2015
This was my contribution to the Bigfoot 120. It also represents possibly the most fun I've had yet at an ultra race despite the epic weather. Despite a lot of things. I'm super proud of my 78 miles and 28 plus hours of running as well as my first ever all night running achievement. These and flashes of apocalyptic scenery from what little was illuminated by sun and LED are what I'll take with me into the dark recesses of my memory. But for all the fun I had this race review is full of rant, controversy, bliss, and a side of my very first hallucination. Yey! 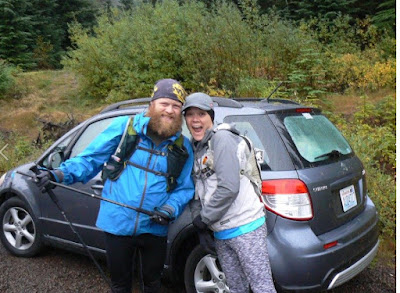 Pics From the Weekend.

First the rant. My God! what have we allowed to be done to our public lands? From the google satellite view there appears to be, all around the first 40 miles of Bigfoot, the squared off clear-cuts of Washington State
s 'sustainable' logging operations. Jesus. No, really, Jesus help us. I used to be not totally against logging but it's just so spiritually ugly I just can't stand it anymore. I see the ghosts of old growth all over, the stumps of giants, and I wish I could I could have been there. A part of me longs for it...and I so wish I didn't have to drive minutes and hours to see the remnants that have been saved.

But crap, what am I talking about? I couldn't even see 13 hours of the first part of the Bigfoot course. What I could was actually beautiful. Occasionally I'd spy some devastatingly beautiful sights of cliffs and trees and trail in the thin beam of my 300 lumen costco handheld. Thank the gods for costco, that little torch was awesome! The environmental disaster I want to touch on more is the erosion caused by MTB their motorized cousins. What the hell? Really, what the fuck? I get that we all get to love and share our beautiful public lands. I get that many LOVE mountain biking, hunting, gunning an ATV. I however think that preservation is more the point of public lands and what I don't see is too many MTB clubs preserving and reclaiming our publicly owned national forest. In actual fact I've seen a lot of good MTB efforts in the urban environment but I've been exposed to none of it in our national forests. Not yet anyway.

What I was exposed to this weekend were erosion trenches nearly a meter deep in places. How is this okay even within the MTB community? How does skidding off the top soil of a national forest mix with leave-no-trace philosophy? While I get this is not wilderness, should that even matter? I'm all for multi-use but I wish the ethic of preservation was more present in the biking community. While this may not be pristine untouched wilderness I still think all users should have a morality of leaving the space cleaner and better then when we found it. You want to ride this trail son? Put in your volunteer hours first. Stop that trail from becoming an unnatural creek bed.

Anyway, running those ruts was terrible and not fun. I'll not lie, that's the real reason of my hate. But for all my rant here I focused little on it in the race. Candice's aid stations at Lewis River, 28.8 and Road 9426-something were full of hot made-to-order goodness. There was also a huge crackling fire at Lewis. That was awesome and a real heart warmer. And the camaraderie born from route finding with a bunch of supportive and kick ass ultra-runners elevated me to being high-on-life in general...never mind the cynical ass-hole(s) that vandalized the shit out of the course markings. (probably some bear-hunting Kawasaki 'conservationists')

What went well for me in this race was well supported by Destination Trail foodstuffs. I ate and drank a ton, and I credit my good attitude with this physical adaptation: my ability to eat and run. I also followed Candice and others' advice: I packed every spare synthetic clothing item I had and left copies of each in waterproof zip-locks in drops at each aid station. So dry changes of clothing, waterproof jacket replacements, great food, and fun-mazing people all conspired to transcend both the weather and whatever challenges the trail dealt out to me.

Kristi Helgeson is sure glad she didn't follow through with that idea! Because then Norway Pass happened right along with the first gusts of 60mph winds that sent aid volunteers scurrying to hold down the poles of their aid tents. 30 minutes off the cut-off now I made quick work of food and putting dry clothing whilst warming myself inside Putt Putt, my/our little 4x4 Suzuki sx4 wonder car. It was surreal watching the first of 7 hours of sideways rain begin to POUND Putt Putt and the aid station to smithereens. Sufficiently puckered at this point I jumped out with my new pacer Andy Chan and began our claw up to Margret's Ridge of Sensual Pleasures.

An hour after seeing cameraman Howie Stern yet again (that guy have an ultra-light stashed somewhere?) Andy and I came across a couple runners (Sarah and ??) who reported in on a woman named Amanda who was "in trouble" and "in need of some body heat" from other warm bodies. Andy sprang into action taking my space blanket and remains of a 12 dollar Walmart poncho to help Amanda and others find/make some semblance of shelter and get warm. Meeting a couple male ultra runners in bad shape themselves (who had also stopped to help out) I saw in them the makings of more trouble. I saw myself. Amanda was in a critical situation and needed to get warm. I needed to not become Amanda. Seeing the bravery of others taking good care of Amanda and aware that I was borderline myself I elected to keep moving forward. I wasn't in as much danger as Amanda yet, but knew enough about myself to know that I'd need to keep moving until Coldwater if I was going to have any chance of outrunning what Amanda was going through. In the end hypothermia did start to catch me within 4 miles of Coldwater aid. Chris Strawn's spotlight, the promise of hot food, a rumor of Tequila and eventually the clear call of my wife into the dark skies of my second night awake helped me gut it out to Coldwater and some new personal records.

I had missed the cut off and while bummed about it I quickly started spinning the upside of this experience to myself. The PR's. The fun. The people. The epic story of survival that was still being written.

Sometime between Coldwater and my first hallucination (on the drive back to camp) Andy and company had finally gotten Amanda warm enough to move down to Chatteau Norway Resort's finest of composting accommodations. Some hours later enjoying the left-over aid of a propane heater and a forest service toilet, a Candice rescue van would shuttle them all back down warm and cozy to Marblemount. Oh the joy. 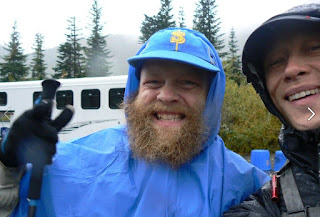