August 15, 2019
There were a lot of mountains I had to climb to complete this one.

The biggest ones occurred before the race even started.

Lately I've been dealing with a lot of mental health issues. During the work week I'll be sitting next to an upper level manager and start to feel lightheaded, disassociated, and sometimes I'll come down with symptoms that mimic influenza: I'll vomit, have diarrhea, get achy, and otherwise be unable to stay at work. Sometimes it's a day or two stuck at home, sometimes I overcome it and get on with my day.

On the drive up to Fat Dog 70 race in British Columbia these symptoms were brought on by the perception that I was stuck in traffic with no way out. Soon after the border crossing I became increasingly anxious. Unfamiliar with the roads in the region I didn't know where I could go to feel safe. As these feelings set in I increasingly felt I'd need to go to the bathroom to unload a major bowel movement. I suddenly became sensitive to hot or cold air coming out of the car's AC and I really wished my friend Chris would take every corner on the highway at no faster than 25 m.p.h.

This is where I found myself as my buddy Chris and I rolled in to Hope, BC. There I purchased a nice looking turkey and cranberry sandwich, popped some gabepentin, and my symptoms gradually subsided. Thank the Lords of Kobol (Battlestar Gallactic reference in case you are interested. You're not. I know). Being higher in the mountains nevertheless got me closer to the only place I could feel completely safe: the woods, the wilderness, Manning Park. 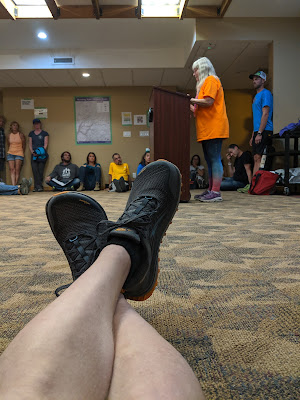 The rest of the night was delightful. The Fatdog 70 race-briefing brought me my first dose of the wonderful people I'd meet along the way. Our campsite was peaceful and immaculately maintained and because I was thoroughly exhausted I slept like a baby.

Saturday morning was a rude awakening. Alarm went off, stomach went off (#2 style - also, I'd had no less than 5 BM's the day previous and 5 more the day before that). Chris and I headed to Manning Lodge to pick up the shuttle to the start. I won't go over every nook and cranny of this course but the first 4 miles was also something I'd label a "rude awakening". I've already started lobbying Heather to make Skagit Bluff's official nick-name "Rude Awakening". 4 miles done I was thankful to start climbing out of the manky valley floor to an elevation where my sweat mattered...and actually evaporated. 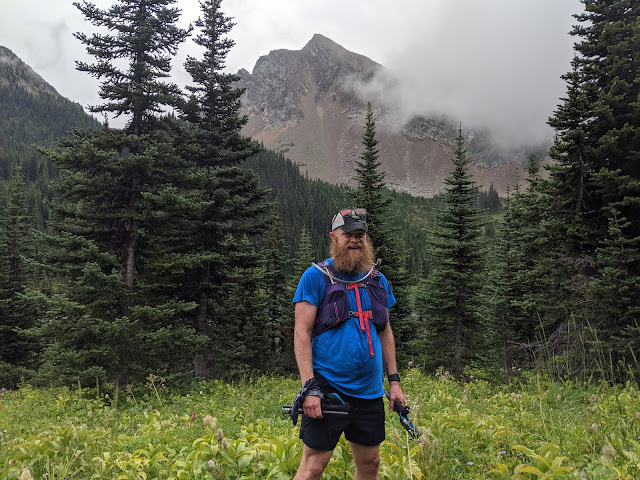 At mile 9 or so we made it to what I would call the "high country" and stayed there more or less the rest of the race. Here in a place aptly named "Paradise Valley" my pulse dropped from the 150s to the 130s as my sweat actually cooled my body. There was really never more than 10 or 20 minutes where a view wouldn't pop out and blast us in the face. As we gained elevation, meadows full of lush green grass and wildflowers became abundant, the sun came out and Dick's cabin arrived! Dicks Cabin, full of exuberant volunteers eager to cook me many things was the beginning of my favorite part of the course. 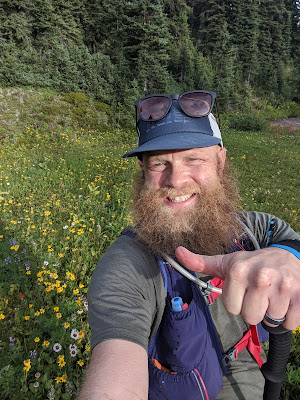 From Dick's on to Blackwall Peak racers were left mostly in the open to enjoy expansive views of Manning Park. After some bacon fuel at Nicomen, Heather Trail captivated my attention so completely that before long it became dark and I suddenly arrived at Blackwall aid station. 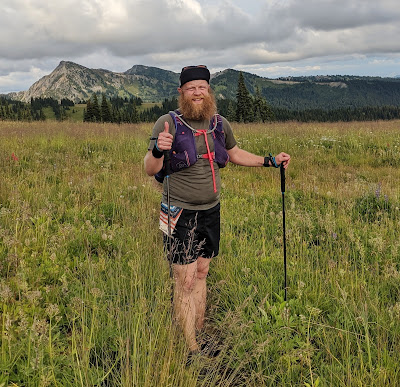 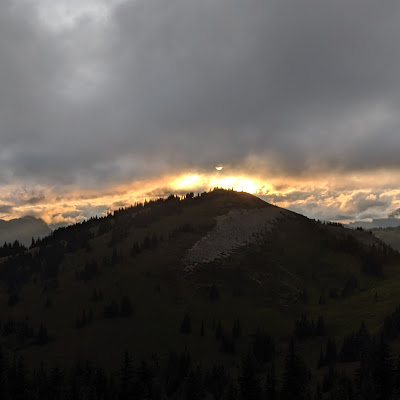 Blackwall was some of the worst and the best of aid for me. "Best" because again, volunteers enthusiastically fueled me with good food, broth and timely advice. It was also the "worst" because their hospitality and propane space heaters made it almost impossible to leave. Plus my bowels wanted some peace and quiet and then a few of my fellow racers were making the decision to drop. Thankfully my new friend Laddie gave me some mint Tums (pro-tip!!!) which helped calm my stomach and bowels as I packed up and left. It was 11:30pm and a cold wind had begun to blow.

Next came the hardest part of the course. 6 miles of cruel pavement down to Manning Park Lodge at the valley floor and then a little bit down the road to Frosty trailhead and aid station. It wasn't the insane 3600 vertical foot climb up a steep mountain at 2am that made me nervous. What made me nervous was many bowel movements that kept coming at regular intervals. I was afraid I'd start having actual diarrhea. Add to that, I'd have to make 2.5 liters of water last the rest of the race (unless I wanted to find and filter water). On top of all that I now hated all my food in my drop bags and this particular aid station didn't have much food I found appealing. My body and mind felt otherwise fine, but I worried the fueling and pooping issues could really make the rest of the race suck. 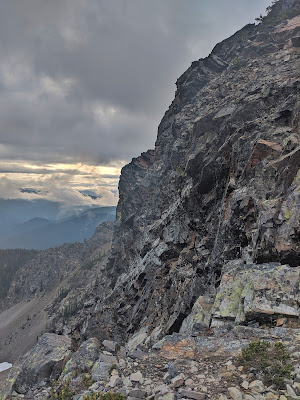 Thankfully it didn't. As I climbed Frosty I enjoyed the ample light of my new Kogalla Ra headlamp and managed to force down regular food between bowel movements. I can't say enough about my new waist light which puts out more light than a typical car's headlamps. Also thankfully the pooping didn't become actual water-sapping diarrhea. All that said, the climb was enjoyable as thick tall pines morphed into sub-alpine. At one point during the night I saw the 120 mile course sweeper napping on the trail. I also traded places on the trail with several of my race traveling companions. As the night waned sub-alpine firs and pines became exposed granite boulders and scree. The sunrise came about the same time I crested the knife edge arm of Mt. Frosty.

Last came "runnable" broadway RD Heather claimed would lead us all home to victory. I'm not sure anything would have been incredibly "runnable" for me at this point. I'll also admit some of the trail was in fact buttery smooth. But half of the down hill was certainly was not smooth. Not the knife edged boulders at the top of Frosty, nor the root filled mess that dominated the last switchbacks down to the valley floor, neither section was smooth. But who cares? Sadism was always the point of Race Director Heather's addition of Frosty anyway, views be damned. 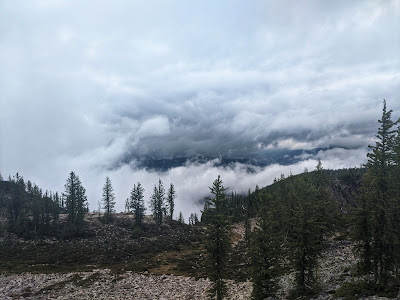 Anyway, thanks to all the volunteers and staff that made this race possible. It goes without saying that ultra runner's should put this one at the top of their list of Pac NW trail races. For me I'll call this good for now and wish all good luck as they pursue their own adventures. Crosscountry Cat signing off for now, goodbye.