I'm Such a Rebel (or) The Failure or NIMBYism. 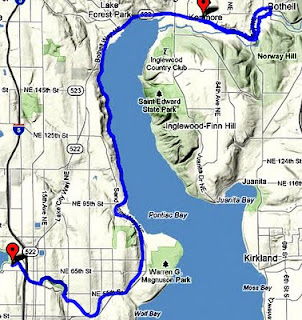 ...what with all the trespassing I did I'm surprised I didn't get a ticket. King County had all sorts of signs expressing dire warnings about what could happen to a runner such as myself deciding to run on a 'closed' trail. Still many of the signs had conflicting information so I suppose I pull those into court if need be to advocate for my obvious innocence. I mean...it's not like there were several GIANT barriers impeding my progress through Lake Forest Park.

I have to say the new Burke Gilman will be a pleasure to bike and run when it does open. As a nice wide and level thoroughfare it corrects a problem that once included a dozen or so residences that were infringing upon the old railroad right-of-way that goes through that part of King County. With the new trail I'm satisfied to say that several structures and encroachments were wiped right off the map. Apparently home owners in Lake Forest Park and Lake City did not get their way and I deem this a success for the public and a boon to those of us wanting a more rideable and walkable city.

Lastly I'll say that I experienced nothing but smooth running pleasure in my new Luna ATS sandals - no blisters and only a little discomfort early on from the friction associated with the grippiness of the sandal's surface. That said, 95% or so of this run was on dirt trail which thankfully lined most of this section of the Burke. In all 18.1 Miles. A nice day out.