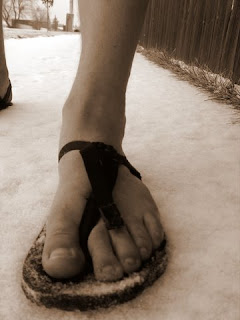 10.7 Miles. It was a beautiful run with heavy big snow flakes coming down making for a soft trail. At 23 degrees it took a mile or two for my toes to warm up. It also took frequent stops to warm them with my hands. The Luna ATS's did good in the snow and tracked well up a 500 foot hill.

About two miles into the run I had the odd chance to once again evangelize about the benefits of barefoot running to another runner who intersected my path for a couple miles. He was on a goal to do 50 marathons in 50 States. I told him of my goal to do the Leadville 100 next Summer in these very sandals. I told him I'd never run so far or without so much joy as I have since changing my running style. Unlike my friends at Super Jock and Jill, I suspect this guy might give barefoot running a try at some point.

Toward the end of my run I must admit that an old blister decided to push up and out from under a thick callus and burst itself upon the webbing between my big and second toes. Thus came the bloody snow (for it was a blood blister from earlier in the week) and the end of a short but pleasant run. As the snow had turned to ice I phoned in my girl-friend for a quick evac to the nearest Starbucks.