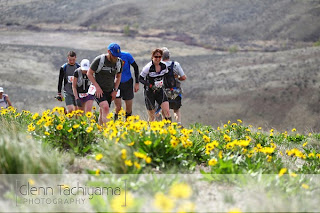 Can't really beat a shot like that from Glenn Tachiyama. Check out his website for photos to purchase here. 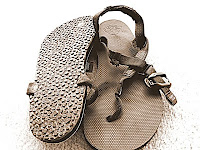 Yakima Skylinehill Rim 25k was one tough 25k. I finished in 3:23:54 but not before the basalt ridden course had thoroughly tested my trail sandals. I haven't run on a more hazardous rock than Eastern Washington basalt - it feels like coral. The Luna Oso mid-sole is tougher than many a trail race shoe and came through it all looking only slightly less pretty. Many regular minimalists put their old, heavy clod-stopping, brick-like trail runners back on for this race. But not me, Luna's were my best choice even for this tough race. I'm pretty proud of finishing this tough 25k in the 72nd percentile with my Luna's strapped firmly and securely to my two soft-skinned feet.

I'll start this off by saying that Yakima Skyline 50k and 25k is destined to be, if it is not already, a Rainshadow Running classic. It was indeed warm, dry, difficult and amazingly beautiful. Every part of the race was fun except the beginning where the crush of runners made a steep cliff-like uphill single track an exercise in patience. Waiting on the trail for grizzled old marathon maniacs was preferable to wasting energy better spent on running the flats and downhills. And yet that was also a bonus as it forced me to remember that my goal here was fun and training and Iron Horse Beer as opposed to beating up on senior citizens. After 45 minutes or so of staring at floppy old butts and dodging a few misfortunate hikers the crowd thinned out as I and a few of my fellow runners turned around and embraced the sky. 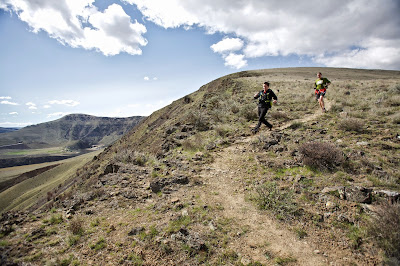 Overall I wouldn't characterize the course as overly "technical" as much was just plain steep at times and very occasionally crazy it's-time-to-glissade steep. Mostly single track and partly old two track road the surface at times did become entirely basalt. There was no need for extra tread on the soles as this course could get quite tacky. The course could be described pretty simply as steep up, cruise along the rim for a bit, steep down, repeat with nothing but sky, mountains, canyon and/or river in full view at all times. There was a camp nearby called Big Pines, but I certainly didn't see any. And then at the end, wood fire pizza trailer, beer, great food and music from the Pine Hearts made this a can't-miss race for 2015. 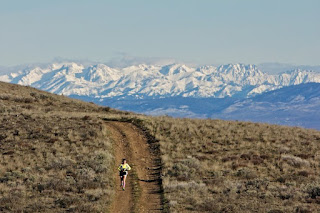